Swimming with the Fishes

Back when my sister and I were young, the highlight of each Fall was our school fair. Not only was it a lot of fun, but it was also our opportunity to win a few pet fish. All you had to do was toss a ball and hope that it landed in an empty fish bowl. Much to the dismay of our parents, Laura and I had really good aim and inevitably we would come home with two or three fish. And every year, we pulled out the cheap fish bowl and deposited our prizes into that bowl where they swam for about a week until they died. During that week, Laura- the good child- took care of those fish, paid attention to them, and cleaned that dirty bowl. I immediately lost interest and was on to the next thing.

So based on my history with fish, I don't think I'm cut out for providing a proper home for the poor things. But fortunately, there are people who are not only good fish care providers but who house them in really chic bowls and aquariums. 1936 must have been quite a year for a few lucky fish who found themselves housed in some stunning fish abodes. Just look: 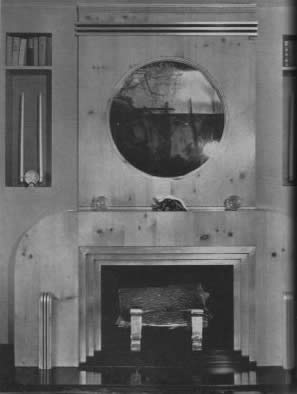 This aquarium was built into the overmantel above a striking streamlined fireplace.

George Frelinghuysen, Jr., a decorator, designed this entrance hall panel in his home. The aquarium was built into the panel.

Frelinghuysen also designed this chandelier aquarium for his bedroom. Attached to the ceiling by black silk cords, the bowl was open at the top, and a group of crystal prisms hung down from the ceiling and dipped into the water. I think it was electrified, but I can't tell. Between the chandelier aquarium and that bed, Frelinghuysen really created his own bedroom grotto. 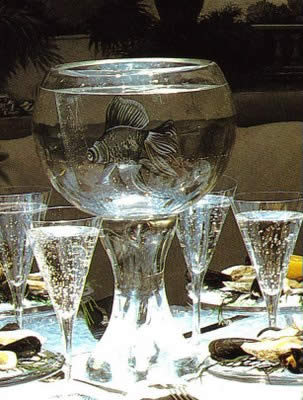 If I were to own a fish, I would use the Elsa Peretti fish bowl. Actually, I might ditch the fish and use this bowl for something else- it's that fabulous! (And no, that's not a real fish in that bowl.)

The Peak of Chic